A few words about history | Konstancin-Jeziorna 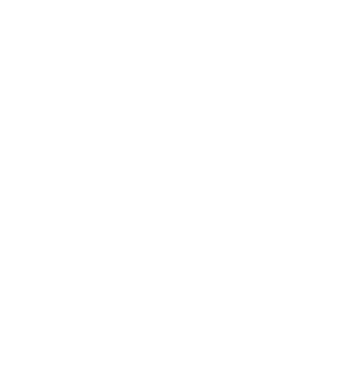 A few words about history

Located in the vicinity of Warsaw, the town of Konstancin-Jeziorna is a unique place and well worth a visit — not only because of its saline tower. It has nature reserves, cycling routes, historic villas, old palaces, highly specialist healthcare facilities, and rehabilitation hospitals beautifully set amidst pine forests. Enshrouded in green vegetation and filled with flowers, Konstancin-Jeziorna — the only health resort in Mazovia — is a perfect destination in every season.

A number of place-names within what is now the municipality of Konstancin-Jeziorna were for the first time recorded in the mid-14th century, but archaeological findings clearly show that permanent human settlements started to spring up in the area as early as the 10th century. Those settlements have survived to this day as villages on the banks of the River Vistula. It was the Vistula that defined the original settlement network and the trade route that ran along the river, passing through the town of Czersk and ending as far away as Kiev. With time, the overland route lost its prominence to the river, which played a key role in the economic growth of the local region — many river crossings were set up, including the oldest one in the 16th-century village of Gassy.

In the late 17th century, a manor house was built at Obory, and the 18th century saw the arrival of the first Olender settlers — evangelical Protestants who signed contracts with landowners to cultivate land, mostly in waterfront areas, using specialist land drainage techniques. These settlers originally came from regions that are now part of the Netherlands (Frisia) and Germany, with a later influx from Pomerania, Kuyavia, and Prussia. In the 19th century, their role was pivotal for the improvement of the Vistula riverside.

It all began in 1897, when Count Witold Skórzewski, acting at the behest of his mother, Konstancja Skórzewska née Potulicka, took care of the estate of her deceased sister, Maria Grzymała Potulicka, who was the owner of Obory. The Count decided to divide some of the land into smaller portions, creating a total of 261 plots, each covering about 3200 square metres. In addition, a rail link was built from Wilanów, and an English landscape park was laid out, complete with a tennis court, a hotel, and a restaurant. The new residential site was given the name of Konstancya in honour of the founder’s mother. This is how today’s Konstancin was born. To commemorate the event, the local community celebrates ‘Konstancja’s Name Day’ in February each year.

The charming plots of land near Warsaw immediately attracted the attention of rich industrialists, entrepreneurs, artists, aristocrats, lawyers, and doctors. Around that time, trips to summer resorts had become a fashionable way to spend summer holidays, so the plots quickly found buyers. The town kept growing. Many buyers hired the best architects and builders to design and construct fashionable villas, cottages, and guesthouses. In 1903, Hugo Seydel opened the first natural medicine clinic in the Villa Hugonówka (now housing the Konstancin Community Centre). In 1917, Konstancin was officially declared a health resort because of its special microclimate and unique landscape features. Its official administrative name is the ‘Town and Health Resort of Konstancin’. 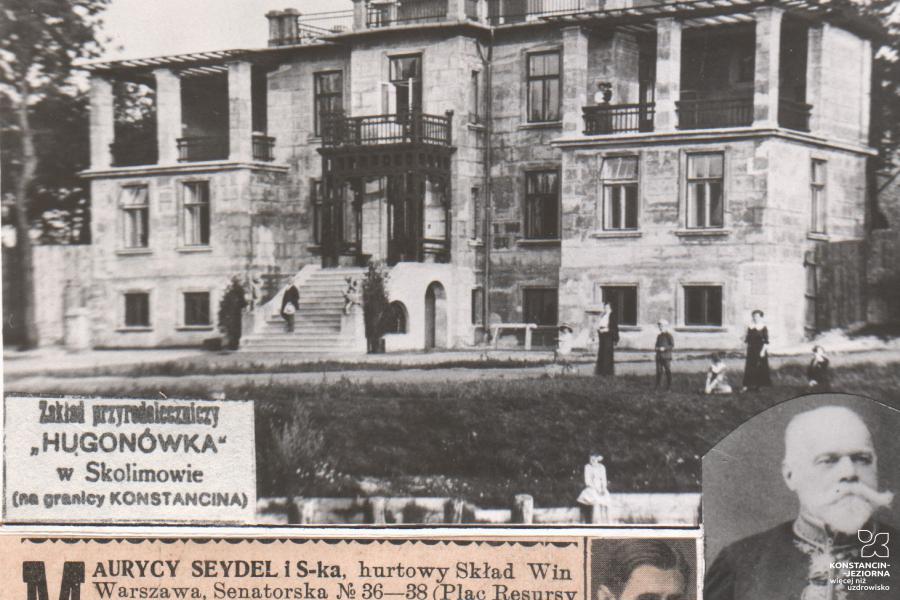 In the late 19th century, Count Potulicki’s idea inspired Wacław Preker, the owner of Skolimów, a former knight's village, to divide his land into smaller plots to offer to those who wished to build summer cottages in the area. The first guesthouses opened in Skolimów in 1900. In 1921, Skolimów and Konstancin merged into one municipality, at that time still rural in character. In the early 20th century, a similar scenario was repeated in nearby Chylice, where plots of land were offered for sale to Warsaw city dwellers who were craving for clean air and long walks in the woods. 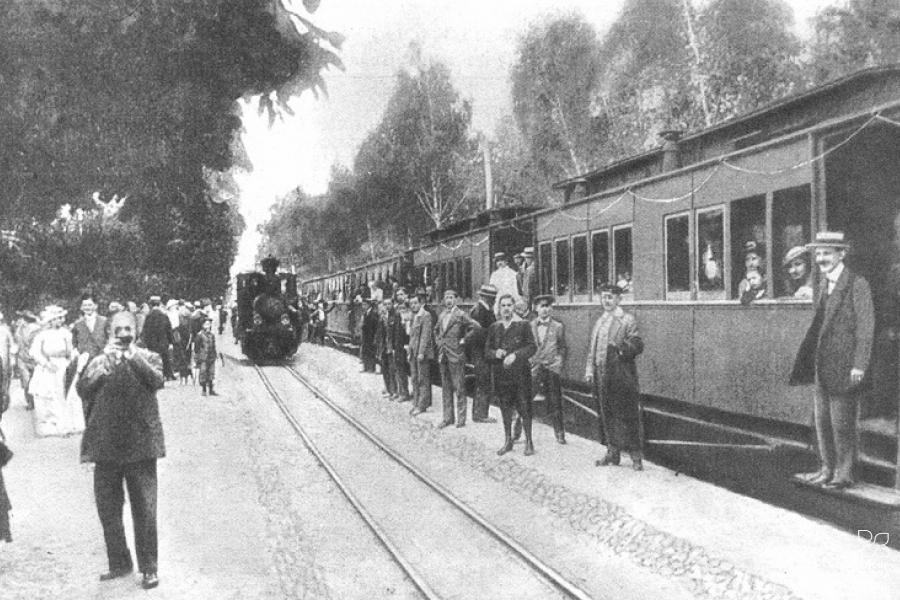 Konstancin railway station in the summer of 1916

The outbreak of the Second World War interrupted the growth of the resort and the residential areas of Konstancin-Jeziorna. Many villas were turned into makeshift hospitals. In 1941, the Germans brought to Konstancin numerous military staffs assigned to conduct Operation Barbarossa. During the Second World War, the local resistance movement was strong, providing fugitives from Warsaw with shelter in houses that had not been taken over by the Germans. In the new post-war political situation, large numbers of houses located in holiday resorts, particularly in Konstancin, were seized from their rightful owners and turned into council flats, adding to the destruction of these historic buildings.

The history of Konstancin is intertwined with the history of many notable Warsaw families, including the families of Machlejd, Zyndram-Kościałkowski, Seydel, Schiele, Styka, Emeryk, Müller, Fajans, and Klimpel. This mixture of Polish and foreign surnames is the best evidence of the multicultural historic identity of Konstancin, created by people of many nationalities, creeds, and political beliefs. Especially women — educated, talented, and emancipated — have played a significant role in the local community since the early 20th century. The first village head of Konstancin in independent Poland was Zofia Müller, daughter of a renowned Warsaw family with German roots. An extremely efficient administrator, she lived in the Villa Zameczek (ul. Sobieskiego 19). Her successor in office was Wacław Gąsiorowski, a famous author of historic novels. Another prominent woman, who often stayed at the Gryf (ul. Sobieskiego 13), was Paulina Kuczalska-Reinschmit, a feminist, social activist, and an advocate of women's rights. She was the founder of Ster, Poland’s first feminist magazine. Konstancin was also a favoured destination for Zofia Chomętowska, an outstanding photographer and documentalist, well known for her pictures of wartime and post-war ruined Warsaw. 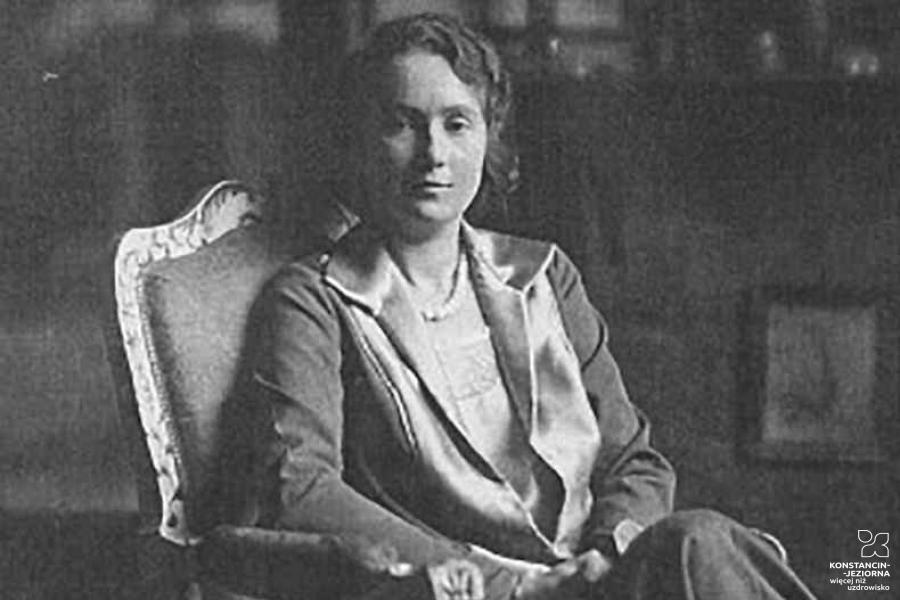 The riverside areas in the municipality of Konstancin-Jeziorna belong to Urzecze (also called ‘Łurzyce’ in dialect), an exceptionally vibrant ethnographic region stretching on both banks of the River Vistula between the old estuaries of the Pilica and Wilga, and the former villages of Siekierki and Saska Kępa (later incorporated into Warsaw). In the 18th century, a person who lived on the Obory estate at the foot of the Vistula Bluff often went by the name of Urzycki (meaning ‘one who lives in Urzecze’). In the 19th century, the distinct character of the Urzecze region was widely recognized by Polish ethnographers, notably by Oskar Kolberg. There were many factors that enabled those blue-clad Urzecze inhabitants to develop their own unmistakable identity. The key factor was the River Vistula, which spurred close relationships with raftsmen who transported goods by water, with Olenders (incomers from Frisia, Pomerania, and Kuyavia, who settled in the area as early as the 18th century) and with other river traders. The local people cultivated fertile land that was regularly flooded by the river, and traditionally busied themselves with horticulture, fruticulture, and the rafting of merchandise to places like Warsaw, Toruń and far-away Gdańsk. Similar lifestyles (Olenders, raftsmen), shared experiences (frequent floods), and unrestricted access to Warsaw’s trade markets allowed for the rise of a unique local community with its beautiful folk costumes, recognisable architectural styles, and an exceptional river-dependent economy. The local landscape had many remarkable features, such as elevated paths in wetland areas (‘trytwy’), artificial mounds on which houses stood (‘terpy’), and raft quays (‘bindugi’). These features were either absent or uncommon in the nearby high-lying fields. 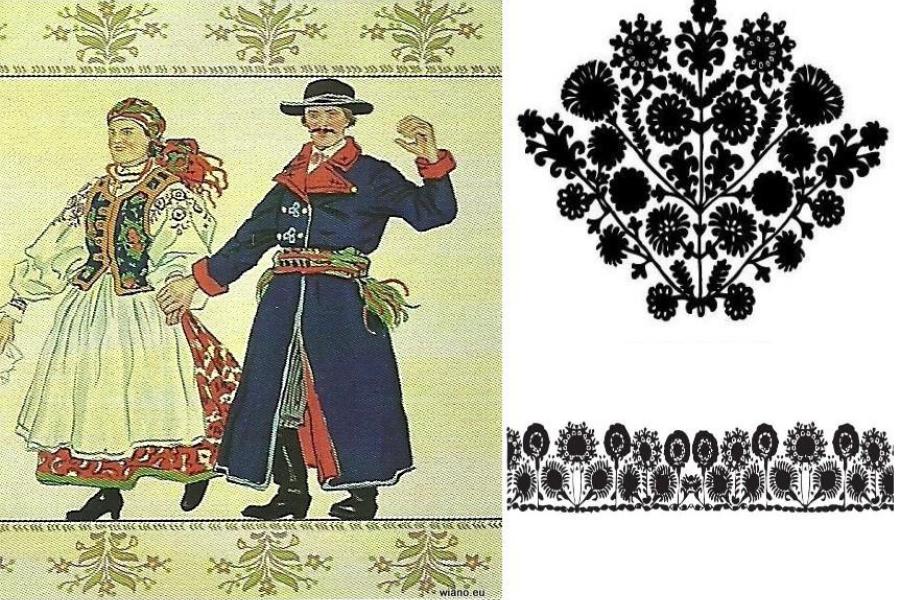 Regional costume from Urzecze and an example of embroidery
Powrót